The characters are currently exploring the plains to the east of Goldenhills Hall, crossing the Twisted Pass and seeking to re-establish contact with the Ahten Nomads, who used to trade livestock for metal goods.

The Ahten are horse-riders and herdsmen.  They fight as horse archers and lancers, wearing mostly leather/bone armor. 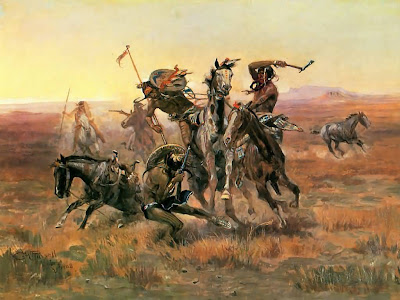 The Ahten are divided into  several clans.  In the winter, each clan moves into small encampments scattered around one of the 6 major valleys on the western side of the Saltwind Prairie.  In the summer they move out onto the high plains with their herds, and skirmish with the gnolls, who live to the north, and the lizard-men, who have villages in the tidal flats and brackish estuaries along the ocean.  They also tangle with raiders and slavers from Hellonde, the City of Chains to the far east (about 200 miles).

The Ahten are loosely allied with the City-State of Arar, called the Gate of the North, which is to the north-east of the Saltwind Prairie and which is perpetually at war with Hellonde.  They used to trade with the Old Kingdom, and with Goldenhills Hall, and with Britha to the north, but Britha was destroyed by some catastrophe they don't like to talk about, and they had to fight hordes starving refugees - the ones that the gnolls didn't get.  They are now somewhat isolated, and their equipment and fortunes have suffered as a result. 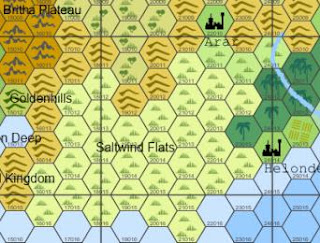 The clans are all run by a Chief, who can be male or female. Usually the Chief is chosen by acclamation, and must be a proven war-leader or shaman.  Family ties mean quite a bit in this, though, so the child of a Chief has a pretty good chance of replacing them, provided they live up to their parent somewhat.

There are six Ahten clans and each clan has a specific valley where they spend the winter.

The Crow Clan:
The Crow Clan are resident in the valley where the Twisted Pass opens out, and are currently under attack by gnoll raiders, ghuls and other undead creatures - seeming to originate from a ruined keep in the hills to the north.

The Crow are scattered and leaderless, with many winter camps destroyed and people missing.  Many Crows have joined with other clans, or have led their camps out onto the plains, where it is somewhat safer.  Javach Rel, the shaman of the Crow Clan is in the east with her riders, raiding against Hellonde slavers.

Atli is the only surviving wife of Droud, previous chief of the Crow clan, who was killed in a Ghul attack.  Oyudran is Droud’s son, and has a chance to claim the chief's mantle if he survives to majority and proves himself as a shaman or warrior.

If Atli can muster enough support, she can rule as clan-chief until Oyudran is adult.  She is a known tracker and huntress, and being Droud's wife adds to her influence.  This is her primary focus.  Secondarily, she wants what is best for her clan.