The mission to scout Shalecliff and rescue survivors was a success.  After a bath, official commendations and a move out of the barracks and into new housing, the party begins to cast around for things to do.  A wagon rolls up shortly thereafter with a chest and a letter, sealed with the crimson hammer of Clan Redhammer.  In the letter are the official thanks of the clan and patriarch for the return of the Redhammer and of Arkask, the nephew of Amberlin Redhammer, leader of the clan and General of the Goldenhills Guard.

In the chest are the material thanks of clan Redhammer.  2 suits of full plate armor, one for Hilbo and one for
Korrum. The suits are clearly the work of master smiths, with red-enameled highlights and discreet Redhammer clan sigils, along with more visible Mountain and Bridge symbols of the Paths Guild.  Korrum’s armor also bears the Hammer and Thunderbolt of Moradin on one arm, and Hilbo’s has the rarely-seen crest of the Huggins family on his.  Princely gifts, and truly unique, for the Paths Guild and the Goldenhills Guard have long been rival factions within the kingdom.

Khidre receives a quiver of dwarven Piercer arrows.  The enchanted ammunition pierces metal and stone like cloth, and are often used to anchor permanently in rock.  Stalagtite receives a Stone Cloak, a leather cloak sewn with thin disks of polished stone, which makes hiding or moving underground or among rocky terrain much easier.

The group then elects to sell those items they retrieved from Shalecliff.  Through the Eigar clan they contact Harroth Vhayde – a slickly prosperous merchant with a plaited brown beard and cold, calculating eyes.  They sell some gear, upgrade some other equipment, and hear Harroth’s proposal that they lead an expedition south over the mountains to restore and rebuild the old shipyard and trading post on the shore of the Imron Deep.  The party consider the offer, but elect to look for other opportunities as well.

Next comes their official briefing from Duggan Kammerin, their commanding officer in the Paths Guild.  The party has been designated as the official Expeditionary Scouting Detachment.  Goldenhills Hall has pursued an isolationist path for the past 50 years or more, but the Paths Guild, Merchant Guild and many of the noble houses have finally prevailed upon the King to break the isolation. The assignment of the Expeditionary Detachment is to explore the areas around Goldenhills Hall, find out the current state of the neighborhood and ideally, re-establish old trading and communication links.  The party is given a broad mandate to set their own priorities, with the understanding that the security and prosperity of the Kingdom comes first.

It isn’t much more than a few hours later, while drinking in a local tavern, that the party realizes that their mission, and ability to move around outside the kingdom, have become general knowledge.  They are approached by a prosperous-looking grey bearded dwarf named Soren Greyrock.  Soren is a trade factor for Greyrock Traders, which work extensively with livestock, muleskinning and transport within the kingdom.
Soren’s proposal is that the party explore to the east, across the Twisted Pass and re-establish contact with the Ahten Nomads, who used to trade livestock, hides, finished leather and furs to the dwarves.  The isolation of the Kingdom has broken those ties, and Soren wants them restored.  The party sees this as consistent with their overall mission, and accept the assignment.

A few days later they cross Twisted Pass, along with some horses, trade goods and Khidre’s three retainers,
Derag, the wizened guide everyone calls Roots, his niece, Nimion the messenger and Gardred, the talented cook. Several days of travel takes them across the height of the pass and down into the long, wandering valley that opens out towards the plains.  Numerous small streams flow down from the hills on either side, forming into an ever-growing river in the center of the grassy vale.

One afternoon the party encounters a burned-out village alongside the river.  Khidre and Roots determine that the attack happened within the last few days, and that the attackers came from the river and returned the same way, dragging bodies along with them.  A few survivors and horses seem to have fled east, and the camp is demolished but largely unlooted.  No bodies or survivors are to be found, so the group continues east, following the river. 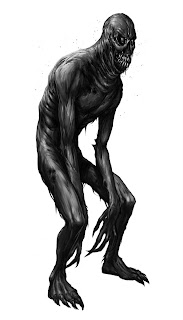 That night, a pair of dark, silent shapes with ice-blue eyes rise from the river and fall upon the camped party.  Luckily, Hilbo is on watch and spots the creatures before they get too close.  A sharp fight ensues, with the blades, hammers and arrows of the dwarves against the claws and teeth of the river-creatures.  Their bite seems to cause a numbing paralysis, and although Hilbo falls victim to the affliction, Korrum, Khidre and Stalagtite are able to keep the monsters from dragging him off and defeat them.

Seen in the light, the creatures prove to be human-like, but horribly malformed, with blacked skin, terrible claws and distended, protruding jaws.  Leaving the dead creatures, the party continues, watching the river more warily and following the tracks of the survivors from the village, who are now only a half-day ahead.

Posted by Jeremy Murphy at 2:02 PM