We're currently getting ready to run another round of 5e Playtest, using roll20.net.  This is going to be a dwarf-only campaign, and we currently have 4 characters confirmed and ready to go, with a couple more on-deck.

The Kingdom of Goldhills is ruled by Andrik Ironhammer, of the Ironhammer clan.  When the Old Kingdom fell, the Ironhammers were the noble house who controlled the gold and iron mines around the Goldhills settlement.  They consolidated themselves quickly and Andrik's grandfather, Falrik, set himself up as the king of Goldhills. 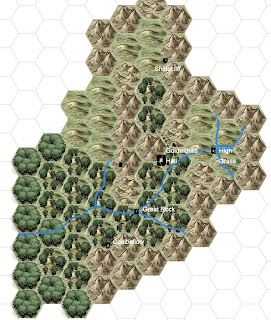 Their main competition since has been from the Eigar Clan, another Old Kingdom noble house who control many of the upland farms, ranches and logging operations.  Several other smaller clans make up the balance of power.  Generally speaking, the Ironhammers control mining and forging operations, and make up the bulk of the Goldenhills Guard, and the Eigar control food production, trade and logging, and make up the majority of the Paths Command and Traders Guild - however, both those organizations are severely restricted in size and budget due to the century or so of isolationist policies of the Ironhammer clan.
Goldhills Hall and surrounding valleys are the main settlement, population is about 7,500 - 5,000 in the hall and 2,500 in the immediate vicinity.
There are also 4 smaller settlements, Greatrock, which is built alongside the river and has a number of waterwheel-powered sawmills, Coalbellow - a  mining settlement at a major coal seam further down the valley, High Grass - surrounded by most of the highland farms, and Shalecliff, a new mining outpost on a major silver and gold find.

I also set up a Campaign Tumblr to post pictures and maps:  http://kootenaymurph.tumblr.com/.

Lots of good tools out there right now, hopefully this will be successful.

Posted by Jeremy Murphy at 2:08 PM No comments:

So WotC just put out their contest to create a character sheet.  Which is nice and all.  If you're into that sort of thing, I encourage you to submit one - the world can always use more cool-looking character sheets.

Just one little problem.  Section 4 - must be submitted as a 300 dpi jpeg file.  Presumably so you can make a FUCKING NON-EDITABLE PDF FILE out of it.

I went straight to the yelling pretty fast there, so I'm going to back up a little and take it slowly.

I must assume that you know of these things called computers, which people have and use now, right?  I mean, the whole playtest is digital.  Digital sign-in, digital feedback, digital files only.

So why in the NAME OF FUCKING IUZ THE GREAT AND TERRIBLE are you sending me character sheets that I have to print out and write on in PENCIL?

It really isn't that hard to create a fill-able, savable form that I can type my character information out on, save like a grown-up and email to my DM.  The community is stepping up and making these things because we need them.  They aren't hard to make.

Please - listen carefully to me.  I don't print any of the playtest material in hardcopy.  I don't want or need character sheet hard copies.  I play full-digital.  Work with me here.
Posted by Jeremy Murphy at 2:19 PM 2 comments: