D&D Next Playtest Session 4: Against the Kobolds

When I ran Chapter 3 of Blingdenstone Enhanced, I didn’t get a chance to use my full remake and ended up using the included map instead.  That actually worked out better than I thought it would, but I still wasn’t that happy with it.

For Chapter 2, I managed to get the Enhanced Version finished before we ran it, so I got to use it.  As you may have already seen in Chapter 2 Enhanced, I combined the random-encounter format of chapter 2 as it’s presented in the standard Reclaiming Blingdenstone with a fully mapped-out kobold lair. I also added some additional kobold traps and modified the encounter table to make it more likely that the party would find crystals without having to roll dozens of encounters to find them.

After chatting with Gurmadden and Kargien a bit more, the party loaded up on supplies (a couple days worth of dried mushrooms) and headed out over the barricades into the ruined city.  They brought torches and have the cleric’s orison available for light purposes, and since they leveled up last session, the Halfling thief (Steven Seagal – he fights with a knife and can cook) has low-light vision now, so he was able to take the lead. 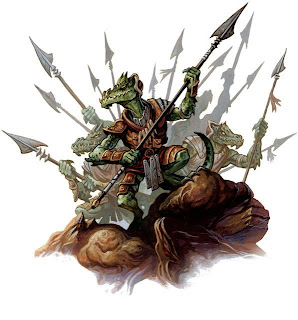 Of course, they neglected to mention that they were actually on the lookout for traps or ambushes and strolled blithely right into the first kobold ambush.  On the upside, the thief was way out in front and his high dex and light armor made evading the net and resulting shower of javelins pretty simple.  The rest of the party rushed up and laid the hammer down on the ambushing kobolds, who scattered immediately and only took about 3 casualties.

The kobolds didn’t get off so lightly on the next ambush, though.  Incensed that the monsters were fleeing them, the party pushed on in full alert.  Steven Segal noticed the next net trap, surreptitiously alerted the party and led them around it, then hid and came back to look for the ambushers.  The kobolds didn't really twig to the fact that the trap had been spotted but were staying hidden, so Steven was able to sneak back and start killing them.

Then the party spotted the hiding kobolds and laid into them – essentially turning the ambush.  Only about 3 kobolds managed to get away this time.  Kobolds are quick little buggers when they are scared.
Afterwards, the party continued on to the Wormwindings (I keep forgetting it’s called the Worm WRITHINGS, so I just changed it to what I keep calling it).  My version of the chapter gave the PC’s the option of asking Miglin to search for the kobold lair directly, which is what they elected to do – after managing to identify the rockfall trap at the entrance.

I rolled a 4 on the amount of time it would take for Miglin to find the lair, which meant that they had 3 random encounters before locating it.  On reflection, I might bump that roll up to a d6 or a d8.  It didn’t seem like it was long enough.  The 3 encounters they had were:  precious metal vein (silver), precious metal vein (gold), crystals…  but they elected not to do any mining on any of them for fear of alerting the kobolds. 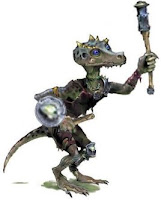 When they finally found the lair, they managed to sneak pretty close to the entrance, then launched an assault.  The initial defenders broke pretty quickly since both fighters and the thief were in hand-to-hand range and the cleric and wizard both laid into them with ranged spells.  The 2-h weapon fighter then pursued the fleeing kobolds deeper into the lair, where he was met by a shower of javelins in the secondary ambush, dropping him from 29 HP to 9 HP in one round.

A quick retreat, cure light wounds, then a charge led by the heavily-armored dwarf and a missile barrage from the thief and the spell-casters broke the secondary ambush and sent the kobolds scattering into a network of low tunnels.  The thief pursued them and they had a bad time.

The rest of the party followed the main tunnel and came up on the kobold barricade.  They quickly formulated a plan and opened up with a missile/spell barrage on the barricade defenders.  One of the spells was Radiant Lance, which hit and killed a kobold defender.  I’d been describing the radiant lance kills as bursting the kobolds into flame, so when that happened, I rolled to see what the burning lil bugger would do, and what he did was fall over onto the barricade and prematurely light off the pitch that they had soaked it in…

That, combined with a sleep spell that had caused half the others to drop asleep, cause big problems for the kobolds, and the few survivors fled again, leaving a merrily burning barricade.  The party waited for the barricade to burn down, then crossed and was faced by a fork in the road.  On way let to a kobold dining room, the other to a tunnel for which came a horrible, horrible stench…

They chose the horrible stench.  I’m not sure why players do that – but if you tell them they smell something horrible, they will go and find out what it is, by god.  I think it’s the same reflex that makes us look inside the Kleenex after we blow our nose. 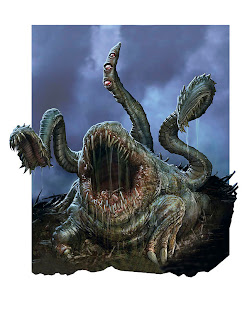 Anyway, the source of the horrible stench was the kobold’s trash-heap, and it’s attendant Otyugh, who was not happy about them attempting to steal his delicious trash.  One short and unpleasant (for the Otyugh) fight later, and the party was able to retrieve a corpse with a masterwork short sword from the pile of garbage.
Turning back, they encountered the kobold scouts who were searching for them.  In a simultaneous ambush, kobolds come off poorly against armored dwarf fighters, and the surviving kobolds fled again.

Concentrated fire can be very dangerous.  If anyone but the high-hp fighter had run into the kobold crossfire, they would likely be dead. 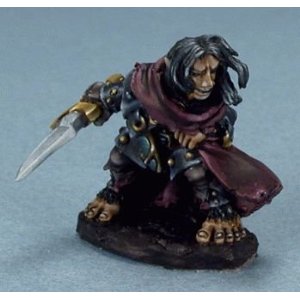 The thief is AWESOME.  I’ve read some places that the thief is seen as somehow problematic.  If that’s the case, you’re playing the thief wrong.  He has good ranged and close attacks, his skills make him essential for trapped or dangerous areas and his sneak attack makes him brutal if he gets the drop on you.  Last session I really saw the flexibility of the expertise dice for the fighter – this session I saw the versatility of the thief.

Short-range AOE stuff from the wizard can clear out low-hp enemies, but it’s really dangerous.  There is none of the ranged AOE stuff from 4th on display here yet, so the risk/reward is really high, which is kinda good, I think.

I dig this game.  As does the rest of my gaming group.  Hopefully we’ll see more playtest stuff soon, because I’m already planning out a long-term campaign.
Posted by Jeremy Murphy at 11:45 AM