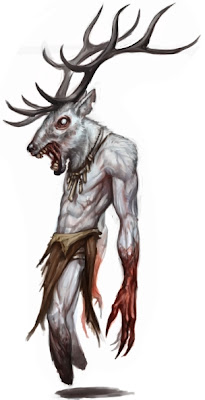 Wendigo are ghostly servants of the White Hand.  They are created by forcing a prisoner to devour his own cellmates, then slowly dying of exposure and starvation.  The feet are devoured by Ghuls, and the head is replaced with that of a deer or elk or buffalo in a dark ceremony.  Then the grisly spirit is sent out to spread death and terror in the name of the White Hand.

Wendigo live only to kill and devour their prey.  They hunt at night or in the dead of winter, and rarely venture out in the sun.  They prefer to strike from ambush, and will rarely fight large groups.

Traits:
Immunities: Wendigo are immune to disease, poison, charm, sleep and fear.  They do not sleep or breath.

Stealthy:  The Wendigo gains a +5 bonus to all checks to avoid detection.

Corner of your Eye: The Wendigo may move from concealment to concealment without triggering a perception check.  It may also hide in lightly obscured areas without penalty.

Actions:
Howl of Terror: The Wendigo can unleash a howl that terrifies anyone listening.  Anyone within 50’ of the Wendigo must pass a DC 12 Wisdom check or be Frightened.  Each round they may attempt to steel themselves by making a DC 15 Wisdom check as a free action.

Reactions:
Leap Away: When the Wendigo is struck in combat, it may leap up to 10 feet away as a free action without provoking opportunity attacks.