But you could see one from there!

I know my players read these, so I'm going to try to avoid campaign spoilers.  But there will be some.

Last night the party, currently made up of: Loria the elf Ranger, Arnik the half-elf sorcerer, Merrin the halfling cleric, Wrenaldo the half-orc paladin and Morwen the half-elf druid, ventured into a swampy valley to try and track down the "shape-shifting creature" that has been dwelling there and spooking the local gnomes.

They agreed to do this in lieu of helping the gnomes with their bounty hunter problem, which is what they promised the local Gnome druid, Stump, in exchange for his help. 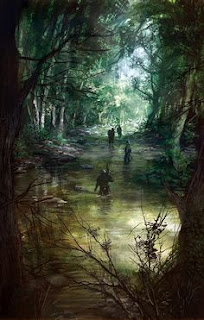 They scouted the valley and explored fairly carefully, using Locate Plant and Animal rituals to find
the most likely hostile beasts.  They also encountered a strange web of corruption affecting some of the creatures, leading back to the location where they scryed a giant spider lair.

As they approached the lair, I felt like things got a bit weird.  First, they made almost no attempt at stealth.  Several of the characters are very sneaky, but no stealth or scouting was done.  Next, there was no shapeshifting/scouting from the druid.  They've used that in the past to good effect, but not today.

The result was that they stumbled into the "welcoming committee" without any sort of advantages or setup.  First, they were charged by an enormous, corrupted wolf.  Good positioning and a lucky roll meant they slowed it and weren't overwhelmed by it's charge, and they started hitting on it, aided by a Faerie Fire spell.

It became obvious pretty quickly that the wounds they inflicted were rapidly closing - the thing regenerates swiftly.  Then a strange magical effect hit the ranger, filling her lungs with swampy water.  She saved, then inexplicably dropped her bow and headed into combat range with her short swords against the regenerating wolf-beast.


She has low AC and few HP, so that was dangerous and it was also notable that, after an initial missed Flame Bolt, nobody tried to use any fire-based effects on the regenerating wolf-thing.

It was also a bit odd that, despite a magical effect filling somebodies lungs with swamp water, everybody stayed pretty close to the edge of the slough. Which turned out to be a mistake, as the horrible animated swamp-corpse undead scrambled out, clawing the everliving FUCK out of the cleric (Crit #1). 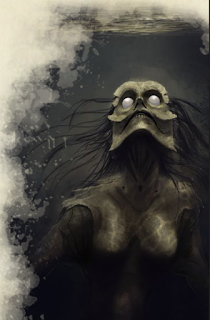 The ranger and the paladin kept pouring futile physical attacks into the regenerating wolf until the wolf landed a max-damage bite that one-shotted the ranger to less than 0.  The NPC fighter failed her CON save, so she started to drown, but luckily everyone else made their save.

Then the swamp-corpse smashed the cleric another one (Crit #2) and he ALMOST just straight died from damage.  He was at -20 with 21 base HP.  So now we have 3 members of the party making death saves, the paladin at very low HP and the sorcerer and the druid right next to a very nasty undead.

Then they got a bit of luck.  The sorcerer finally brought the wolf-beast to 0 hp using something OTHER than physical damage, so it stopped moving.  The druid dropped some heavy Radiant damage on the undead thing with Moonbeam, and the Paladin smoked it with his enchanted glaive, so the undead broke for the slough and escaped under the water.

Then the ranger rolled a 1 on a death save, the NPC failed a second death save, and the players who were still upright did some healing and bandaging to keep everyone alive, followed by an "ahem" strategic withdrawal.

It was odd, though.  After so many sessions of careful planning, scouting, avoiding danger,  they walked into this session without much of that and JUST. GOT. CREAMED.  I'm fascinated to see what they do next...
Posted by Jeremy Murphy at 3:17 PM