First Session of After the Bomb

After the Bomb 2e is a stand-alone RPG that uses the core Palladium rules with the TMNT mutation rules added in.  In this game, I'm also allowing things from Ninjas and Superspies, and possibly something or other from Heroes Unlimited.

Basically, it's a post-apocalyptic RPG featuring mutant animals!  I'd forgotten how much I love TMNT characters.  That's what makes this system great.  Cause it sure ain't the over-complex, fiddly combat or the as-bad-as-3e antagonist generation or the "simple" (by GURPS standards) vehicle rules..
But I can houserule all that shit.  The characters...  so good.

Let's see - we have 4 characters in the game at this point.  Perry, the DM from our OD&D game, is playing a 7'3", 380 lb mutant sheep named Baab.  Baab is a trained Farrier (which presumably means he can shoe himself) and also knows Sumo.  He speaks both english and japanese with a scottish accent (lllolll's his lllll's). 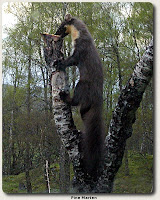 Then we have Jennie's character - a currently unnamed mutant Marten (which is like a large, tree-dwelling ferret).  This character is ridiculously fast, knows Drunken Monkey kung-fu, can pilot military vehicles, and knows the Art of Hiding, which is the neat trick where you stand RIGHT BEHIND somebody and move around so fast they can't see you.  Which would be awesome but she took the Musk Gland: Strong and Stinky bit, so the character is basically a really Silent but Deadly fart.  Which is also kinda great.

Next is the brains of the operation: Dr. Cat. Dr Cat is called Dr. Cat because he is pretty much a large scottish fold cat, but with a few minor differences from the traditional cat.  Difference one: Dr. Cat is a medical doctor, with degrees in Internal Medicine, Surgery, Pathology, Radiology and Dentistry.  Also Clinical Genetics, Anthropology, Botany, Analytical Chemistry (I don't even KNOW WHAT THAT IS) and Public Speaking.  Except he can't speak because he IS A CAT.

Oh, and Dr. Cat has ectoplasmic hands - for use in surgery, and a crippling catnip addiction.  And he can drive both motorcycles and trucks.  So he's pretty much Toonces the Driving Cat. 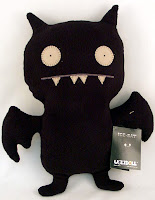 As if that wasn't enough, the final character is possibly the best of all.  He is a 14" tall mutant bat.  Who knows Ninjitsu.  Also he can talk to electronics, sees by ground-penetrating sonar, can fix mechanical objects by touching them, and eats only bugs. Which explains the "Breed and Control Insects" skill.  It does not explain the "Bolt-action rifle" and "WP Grappling hook" skills.  Man.  You can FLY - what do you need a grappling hook for?

Because you are a ninja, is the obvious answer.

The first session consisted of finishing the characters, waking up naked in a tube full of liquid, getting out of the tube, convincing the lab AI to download itself onto a memory crystal, convincing the elevator that it would be fun to release the brakes and plummet down the shaft in order to save electricity (reactor power in the complex is very low), searching through some labs for clothing (Baab is kinda body-shy).

The main feedback, "not enough stuff to kill".  Ah 4e-players, how simple things are in your little world.  I'm very excited - this is shaping up to be epic and silly and awesome, which is pretty much how I like my games to be.
Posted by Jeremy Murphy at 2:14 PM