For the last few months I've been running a D&D Next Playtest, which has been going pretty well.  In fact, I have another playtest write-up to do, but I probably won't get to that for a few days, as I get to take my daughter, the Tiger Fairy Princess Warrior (tm) out Trick or Treating tomorrow night.

I also got my beta test key for The Banner Saga (I'm 1 and 1 in multiplayer so far), which I backed on Kickstarter, AND I got a release email from Stardock that my free copy of Elemental: Fallen Enchantress is ready.  That was sorta a Kickstarter in the sense that I pre-ordered War of Magic and is sucked so much donkey dong that Stardock decided to give me Fallen Enchantress for free.  Which was nice, but considering they've had $60 from me for about 5 years now, seems like a bit of a long-term investment.

AND the new Playtest package dropped yesterday, plus the beta for Tabletop Forge came out, which I ALSO supported on Kickstarter.  And I need to read more Vornheim because, well, it's good.  Oh, and the Steam Halloween Sale is on and I MUST HAVE STRENGTH.  THOR GIVE ME STRENGTH NOT TO BUY MORE GAMES.

So yeah.  There is all that.  But tonight I want to talk hexcrawl.  I really want to do a decent hexcrawl, so I've been playing around with setups and reading up on people that are successful at running them.

I got started using Hexographer to build a random map, then used the Hex Map Key from Abulafia and the Fantasy Region generator.  That got me a basic 40x40 hex map, some political players and bunch of cool hex ideas. 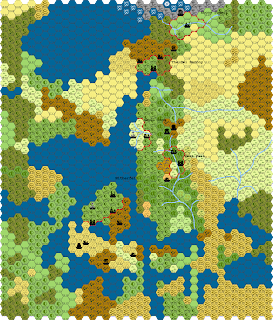 But then I started thinking about what hex size I wanted.  I figured 10 mile hexes would be good.  A bit of calculator work meant to me that meant about a 150,000 square mile area.  About the size of Germany, or the southern third of British Columbia, where I live.   So that means that the map I have is way to varied in terms of geography - can't go from ice flows to equator in 400 miles.  I figure I'll rework the map assuming that it's a coastal area at about the same latitude as Washington State. That gives me some nice seasonal variation, a decent amount of area and reasonable diversity in geography.

I'll use the Medieval Demographics Made Easy Domesday Book to work up the regions a bit more, then I want to identify major humanoid tribes and their regions, work up some random tables and develop the map a bit more.

Here's what I have so far - more as it develops.
Posted by Jeremy Murphy at 11:00 PM