At first blush, these two seem like they are the same thing – what we call making a character.  They really aren’t, though – and I have a strong preference for one over the other.

Let’s start by defining our terms.  Not defining your terms is a HUGE problem in conversations about role-playing.  Things like “balance”, “encounter scaling” and “resource management” mean TOTALLY different things to different people, so a conversation can go off the rails pretty fast as people talk past each other.  And I like to have conversations where everyone is mostly on the same page - at least in terms of what is being discussed.

To me, character creation involves selecting from available options for mechanical elements of the character and making up from whole cloth the non-mechanical elements.  Crunch and Fluff, if you will.  The best example of this that comes to mind is character creation in Vampire: the Masquerade.  Everything is allocation and trade-off for the parts of the character that have game mechanics.  You are not reliant on randomization at any point.  You can make up a backstory and build the character towards fitting that or create a character and then build a backstory around it.  Either way works. 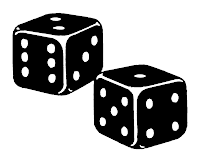 Character generation, on the other hand, relies wholly or largely on randomization – dice rolls – to determine mechanical and occasionally non-mechanical elements of your character.  This can include things like Background, Stats, Hit Points and other core mechanical elements.  D&D pre-4e is a mix of creation and generation.  Traveller or Hackmaster are even more generation-heavy, and many homebrew systems introduce random tables for various elements of character generation.

The standard arguments in favor of generation go something like this:
1)      If you allow players to choose everything, then certain optimal solutions will be identified and abused.  Randomization solves this problem.
2)      That’s how the game designers set it up, so that’s the way it should be done.
3)      You might get some bad rolls, but they will balance out with good ones in the long run.
4)      The interaction of random elements creates neat and interesting things.

Me, I don’t like character generation.  I believe that it is poor game design, displaying a failure of imagination and skill on the part of the game designers.  There is nothing that randomization in the “making a character” phase of an RPG can do that a well thought-out system of allocating resources cannot do better.  All randomization or “character generation” does is create arbitrary winners and losers right at the beginning of the game.

Whenever I’ve pointed this out, the immediate response has been “well surely your players are mature enough to deal with that.”  Or, “but things balance out in the end if you look at the big picture”.  This, frankly, is bullshit.  Or malarkey, as popularized recently by one Joe “Angry Gramps” Biden.

Why should my players have to be “mature” enough to deal with getting the smelly end of the randomization stick?  What concrete benefit does this provide to your table or gaming experience?  None, say I.  Wanting to make interesting decisions myself rather than being forced to accept random results is reasonable, especially in the context of modern tabletop gaming.

I feel that the best example of why generation systems are problematic is the new player, sitting down at the table excited and ready to play for the first time.  “No,” you explain, “you don’t get to make up your character, you have to roll this handful of dice and check these charts – that will tell you most of what you need to know about your character.”

They roll and check the results, which indicate they will be playing a diseased murder-hobo.  “Ah, not to worry," you blithely reply, "I’m sure your next character will be better if/when this one dies - unless he isn’t.   He’ll be behind everyone else either way of course.  Good luck and enjoy your experience.”

And we fucking wonder about the decline of the tabletop RPG?  It’s like drinking a Rusty Nail.  You have to be specially conditioned to enjoy that shit.

That being said, creation has its own pitfalls.  It has to present interesting trade-offs.  There should not be some choices that are clearly superior to others in all cases.  It should be reasonably easy to understand the ramifications of your decisions, without extensive knowledge of the entire system.  Choices should start out manageable in scope and work up to more complex.

This is harder than listing a bunch of randomly rolled statistics and write up some background tables.  It requires quite a bit of work and thought and skill.  Done poorly, it leads to endemic min/maxing and generalized munchkinism.  Done correctly, it makes character creation and development as interesting a part of the game as all the other components, rather than a crapshoot.

Thoughts?  Do you prefer character creation or generation and why?  What systems have you played that do interesting things with either method?
Posted by Jeremy Murphy at 3:38 PM