No, really.  Lance of Faith can fuck right off. 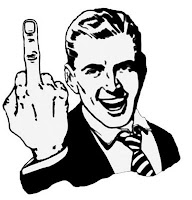 Wipe the drool off your chins and remove the long-range direct damage spells from the cleric repertoire.  They add nothing to the game except to blur the lines between the spell-casting classes.  They are a brainless default "pew pew" bullshit addition.  Clerics "direct damage" is putting a mace inside your brain-pan.

I didn't hate laser clerics back in the 4e days.  I thought it was kinda nice for clerics to have a ranged attack option at the lower levels.  But listening to players in my test game say "oh, I wonder what I'll do.  Right - the same thing I do every time - cast lance of faith" made me burn with the white-hot rage of a thousand suns.

Lovely - a default spell, and worse yet, it's ranged damage, and worse yet for some clerics it's at-will, and  worse yet it has higher damage than magic missile (albeit with a to-hit-roll).


Conclusion:
Fuck Lance of Faith.
Posted by Jeremy Murphy at 11:05 AM