I've been working on a hexcrawl, and one of the things my research is making me notice is how totally messed up the scale on many fantasy maps is.

The Roman Empire at it's height was 2.5 million square miles.  So this nation of traders is about 1/2 the size of one of the largest empires in antiquity.  See this handy tool for more comparison.

It sure it a nice-looking map, though.  Too bad the scale is utterly buggered.

I decided to go small with the initial nations encountered in the D&D Next Hexcrawl I'm working on.  They run between 3 and 12 90-square mile hexes each.  I started them using the Abulafia random fantasy region generator, then placed them on the hexmap, then worked up their stats using Medieval Demographics.  I was relieved to generally find that my instincts were close to correct about town sizes and proximity.

I'm also adding Dwarven Holds, Elf tribal areas and general regions of humanoid activity, as well as setting up a regional key that I can use to determine random tables and hexstocking activity. 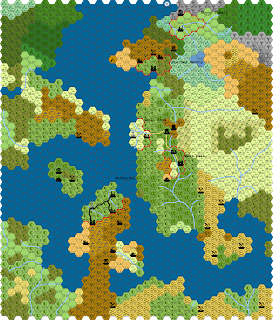 West Pass is a ruined principality near a great river.
The weather there is usually lightly windy and warm out.
It is ruled by a genius.
This domain gives a strong sense of being very ancient.
This domain is famous because its impregnable defences.
The laws of this domain are very strict. Punishments for misdeeds tend to fit the crime.
Recently, the land has been threatened by vicious gangs of bandits.

The hand of the ruler rests firmly but not excessively on the people, and the Towns have about 30 soldiers each. The villages have 5 soldiers each.  The total muster of the principality is about 800 soldiers.  In an emergency, about 1500 more armed farmers can be raised as well. The population is primarily Humans with a considerable number of Dwarves and Gnomes and some Elves and Halflings.  Humanoid races are not welcome in West Pass.

Skull Cove is a desperate nation in a grassy plain.
The weather there is usually foggy and warm out
It is ruled by a wealthy merchant.
The people of this domain are fond of good food, drink, and merrymaking.
This domain is famous because of the horrible monsters that inhabit the countryside.
The laws of this domain are almost nonexistent. Punishments for misdeeds tend to be fatal.
Recently, the land has experienced the surrender of their great admiral after an overwhelming naval defeat.

Skull Cove covers about 500 square km, of which 200 square km is arable, accessible land.  The total population is 14,000 people, dwelling in 31 villages, 1 small town, about 5 km apart. There are about 4 soldiers per village, with a total muster of 150, plus ship crews. The population is mostly Humans and Selkies, with a considerable number of Wolfen, Orcs, Goblins.

The Owl Barony is a wealthy kingdom in the high mountains.
The weather there is usually fairly rainy and cool out
It is ruled by a youthful leader.
This domain gives a strong sense of being a place of deep mystery.
This domain is famous because it is very ancient, and has many ruins from a lost civilization.
The laws of this domain are just and fair. Punishments for misdeeds tend to be conducted behind closed doors, so no one is sure what happens - except that the survivors emerge changed and broken.
Recently, the land has been threatened by a jeweled dagger which excites the greed of all who behold it.

Owl Barony covers about 1500 square kilometers of land, of which 410 square km is arable.  The total population is about 28000, dwelling in 57 villages, each about 6 km apart. 2600 live in the main town, which is fortified and close to the Owl Castle.  There are 50 soldiers in town and about 7 soldiers in each village. The full muster is about 500 trained troops, and the population is mainly Humans and Dwarves, with some Wolfen and Bearfolk down from the Drowned Moors.

Ebony Summit is a thriving nation near a great river.
The weather there is usually powerful winds and cold.
It is ruled by a spirit.
This domain gives a strong sense of being gray and gloomy.
This domain is famous because Cursed Students of Heirophant Provosts are based here.
The laws of this domain are favorable to one class of citizens over another. Punishments for misdeeds tend to involve loss of property.
Recently, the land has experienced the capture of a bandit carrying ancient treasures looted from a previously unknown tomb.

Ebony Summit covers about 2750 square kilometers, of which 1700 square kilometers are arable land.  The total population  is about 117,000.  There is 1 city of about 8000, 2 towns 30 km apart of about 2000 each, and 200 villages 3 km apart.  There are 2 castles and 1 ruined and abandoned castle in the south.  Ebony Summit is tyrannically ruled - the city has 200 soldiers, towns have 100, village have 14. Total muster is over 3000 soldiers.  The population is mostly Humans and Halflings with many Wolfen and Orcish slaves.

Nitherfell is a large city-state in an archipelago.
The weather there is usually very rainy and temperate
It is ruled by the aristocracy.
The people of this domain are unusually short.
This domain is famous because it is very ancient, and has many ruins from a lost civilization.
The laws of this domain are nonsensical. Punishments for misdeeds tend to be banishment.
Recently, the land has been threatened by Bercimemnon Rowaric, the Leader of the Way ,.

Nitherfell covers about 4500 square km, of which 1900 square km is arable land.  The total population is about 135,000, mainly living in 267 villages 4 km apart, each with a population of about 700.  There are 3 towns, the capital has a population of about 8000, the others, about 1500 each.  There are 3 standing and 1 ruined castles, and zealous law enforcement. Villages about 7 guards each, the smaller towns have 20 guards and the capital has 80 guards. The total muster is around 2000 soldiers.  The population is mainly Humans, with a few Selkies, Dwarves and Gnomes.

Posted by Jeremy Murphy at 9:48 PM