After taking the summer off, the old Playtest Group reconvened to kick the Dwarves! campaign off in full 5E style.  There have been a number of character changes, of course, but they have managed to maintain a dwarf-majority party.  However... one of the member of the party is now an elf...  An elf spellcaster, to boot!  Horrors.  How will the intrepid dwarves deal with this arcane point-ear in their midst?

Pretty well, as it turns out.  Of course, +Torben Schau, who plays the point-ear, couldn't make the session, but other events make me optimistic that he will eventually be accepted by the xenophobic, er, intrepid
dwarves.

The current adventurers are:


We did quite a bit of stuff via email before the first session started, so when we did get going, the immediate problems were well-established:  lack of food, a damaged hold and freed slaves from hostile races. 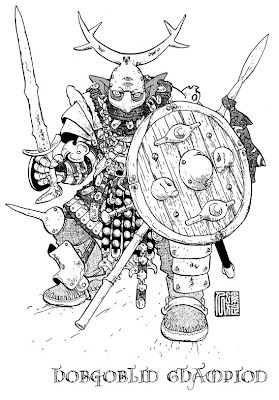 The slaves were the first issue addressed.  Specifically, the hobgoblins, orcs and goblins.  Knowing that
hobgoblins are almost pathological about honoring bargains, Hilbo negotiated a mercenary contract with Fear, the leader of the group.  They agreed to work for the party patrolling near Gnollshead Hall in exchanged for regular gold, any loot they take, and the rights to camp in the old fort that the cult of Doresain abandoned.  The hobgoblins will also be paid a bounty for gnoll tails (lots of gnolls in those hills) and are allowed to trade for supplies at Gnollshead Hall.

Next, the duergar.  These slaves were in a near-catatonic state due, it was revealed, to the worms that were eating their brains.  Apparently duergar all have brain-worms that they take drugs to prevent from lobotomizing them.  Slie was able to give them a concoction that killed the brain-worms, but they didn't come all the way back from that, and now the dwarves have them doing simple labor - probably for the rest of their lives.  But it beats the alternative.

Then, the drow.  The two slaves, Verraki and Verrakath, were discovered to be members of House Inncon'eal, a minor, male-run house which provides mercenaries and guards for more powerful houses.  They agreed to bring a message to the head of their house in exchange for freedom, which the dwarves granted.  Surprising leniency for the party, which bodes well for Sinder!

On to the food and repairs.  Despite the dwindling food supplies, the dwarves got right to work, cause, hey, dwarves!  Wanderer and Korrum took a bag of money north to Gnollshead Hall to purchase supplies, and Hilbo, Slie and Sinder stayed behind to supervise rebuilding.

Wanderer and Korrum had a small run-in with Ogres, but were able to secure a good-sized herd of Ahten cattle, getting them back to Greatview before starvation really began to bite.  Fortunately, the fortifications, forges and fungus farms were all repaired as well.  The only wrinkle as found during the clean-up of the upper mines.

A 10-foot wide hole, coated with purplish slime.  Looks like one of the duergar Purple Worms is still hanging around the area.  Following the worm tunnel deeper into the mountain, the party comes upon a large cavern filled with pools of greenish, steaming water and a strong caustic stench...

Posted by Jeremy Murphy at 3:36 PM