This was a big session, so I split it into 2 parts:


The jailbreak is a classic trope, and it’s usually a fun one.  Putting the players in a situation where they are at a disadvantage, and have to juggle stealth, timing and speed in an environment specifically designed to hinder them.

So when we left off last time, the party was in the custody of the Splinterbeard clan, acting (allegedly) on behalf of King Ironhammer, and were being transported to the king’s private dungeon.
The party decided that it was too risky to make a move while being transported, so they hung tight while during the trip.  They were marched underground, first along the major tunnel between High Grass and Goldenhills Hall, but then turning south under the mountains on the southern edge of Goldenhills territory.  Luckily, Korrum’s background is as an Underdark Guide, so he was able to get a good idea of where they are.

The trip ended at an unremarkable section of corridor.  The escort moved a concealed panel of stone aside, revealing a narrow stairwell.  The guards hustled the party through a small complex of rooms, clearly barracks of some sort, then into a room with a heavy stone slab, raised by a heavy winch and pulley.  Under the slab was another narrow stairway, leading further down.

The lower level proved to be a series of circular rooms, joined by narrow corridors.  The guards
escorted them to one of the circular rooms with a 5’ hole in the floor.  They lower a rope ladder and down the party goes, into the dark. The dark proves to be a dirt-floored cell – beehive-shaped and about 20 feet deep, with the access hole at the very top.

But these are CHARACTERS, so they don’t sit there very long.  Well, for a while.  Couple of hours or so.  Just to let things quiet down.  Then Wanderer, who has managed to keep a dagger, some thieves tools AND his magical chain (change self and sleight of hand are wonderful), is on the case.  A very brief session of lockpicking results in everyone out of their shackles.  From there, it’s a matter of getting up to the top of the hole.

They decide on a Hilbo-assisted jump-launch – which goes somewhat awry.  Wanderer’s luck and dexterity keep him from crunching on the stone ceiling, and he manages to catch the lip of the hole.  He rolls out, and quickly discovers that there are several guards close by, and manages to get out of line of sight before he is spotted.

Using one of the magical powers of his enchanted chain, Wandered slips into the Fey and slides around the guards into another corridor.  He finds more locked doors and sees an odd-looking metal wall at the far end of one corridor.  Deciding that continued exploration is risky, he goes full Changeling.

Shifting himself to look like one of the guards that brought them down to the dungeon, he turns right around and walks into guard chamber.  Slickly convincing the guards that he’s been sent down to get a rope ladder, he strolls into the guardroom, gets a rope ladder and goes back over to the hole where the rest of the party are trapped.  Critical success on Deception rolls are handy. 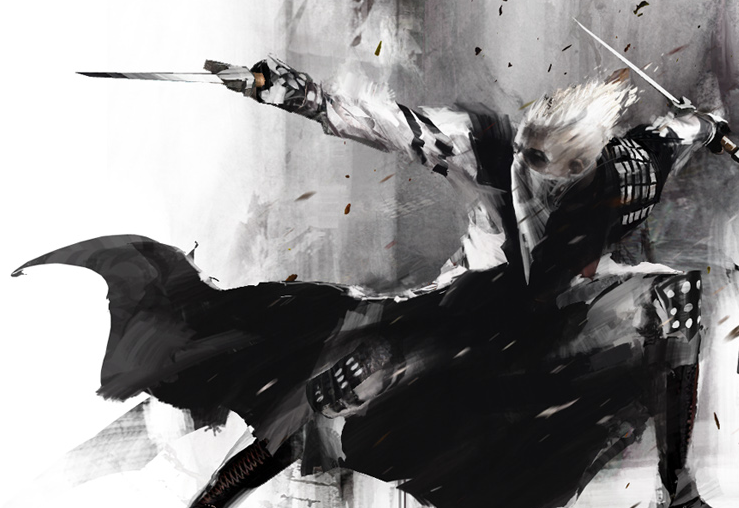 However, the hole is still in direct sight of one guard, who is himself in direct sight of two other guards, so Wanderer has more thinking to do….  Illusions are your friend here.  Wanderer steps out of sight, creating an illusion of “himself” falling over into the pit.  Inspired.  A guard comes to help, and gets kicked into the pit.  Wanderer (still looking like a guard himself) motions the third guard over, and Slie (from in the pit) starts shouting “I’m OK, but I need help getting out” and doing a damn fine job of sounding like the first guard.

The third guard turns his back on Wanderer and takes a dagger in the throat for being dumb, and shortly thereafter (aided by a Silence spell from Korrum and a nasty shot with a hand crossbow by Wanderer) there are 4 dead guards and no alarm raised.

So now the party really gets into it.  They liberate their gear, find a number of imprisoned servants who inform them that the King is maybe insane, and has imprisoned them for “trying to poison me,”  “plotting to murder me,” and “stealing the thoughts from my brain”.  They also release an elven Expeditionary from Leagrove, who has been missing for 6 months and a dwarf, Dorren Eigar, apparently a cousin of their friend Khidre.  Wanderer notices that Dorren’s “street clothes”, which they found in a chest near their own equipment, conceals considerable hardware in the form of hidden daggers, garrotes and poisoned darts.