The slipstream of the 20-trailer road train ripped at me, roaring like a dragon, trying to claw the bike under the churning wheels. With a mental pulse, I gave the Rapier more gas, surging through the spray and accelerating past the 1000 ton automated monster. Slashing rain and lights blurred together to turn the highway into a surging river of color that the bike and I flowed down, darting through the currents of the traffic like a black and chrome fish. 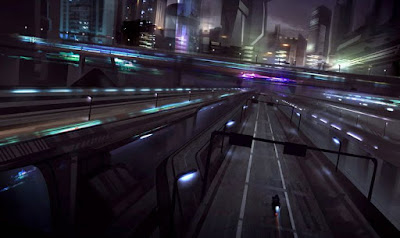 Up above 200 mph, you don’t steer so much as flow. Any mistakes will result in near instant destruction, titanium bones notwithstanding. It’s an interesting place to be, but I don’t indulge like this very often. Risk, like any other drug, needs to be taken in measured doses. OD’ing on danger kills you just as dead as heroin.

As you leave Seattle and begin to enter the Barrens, the streetlights start to go out. Not all at once, but gradually, like stars dying, leaving just the ribbon of red taillights. A stream running red, out into the void. I’m starting to slow down, the manic edge of speed and risk fading away as I merge back into the flow. Running with the river, instead of skittering through and around it.

The call light on my HUD starts to blink. It’s Oscar. Sooner than I expected. That’s good, though, it meant everything on the old man’s side went smoothly. It’s also useful information. I suspected that Oscar had any mention of my name routed to his office, but now I know for sure.

I ease my bike off the road, onto a darkened plaza that once held a gas station and restaurant. The lights are dead, like the place, like the Barrens around it. Now it’s just a ruined island lit only by the sweeping lights of the red river, flowing past. This call might take a while. Oscar has questions, just like usual.

Keying the line open, I keep it casual, pretending - like we both don’t know what the call is about - that this is a normal conversation.

“Gwydion.” Oscar’s voice is flat. He sounds annoyed. “Could you possibly explain why I just had to pull an extremely upset Vietnamese teenager out of a Customs & Immigration interrogation room?”

“Is she Vietnamese? I thought maybe she was Thai. I’m really terrible at picking out what flavor of southeast asian people are.”

“I’m trying to imagine why you thought that telling her to mention your name during her Immigration interview was a good idea. I’m coming up blank so far. Enlighten me?”

“Well, obviously I can’t help her through Immigration myself, what with all the… business. So, I thought, who’s the second-best person to do that? It seemed obvious that you would be a good choice.”

“So instead of just calling me and asking, you just put your name out there, so that she’d get hauled into a special briefing room and I’d get woken up at two AM? That’s the special Gwydion Peterson we all know and love. Causing shit for the sake of causing shit.”

“Hey now, I was doing a good deed. She needed help.”

“If that’s your version of a good deed, spare me from your fucking bad ones.”

Oscar was calming down. The flat, hard notes were fading from his voice, replaced with his usual weary resignation. Or maybe he just sounds that way when he’s talking to me.

“She’s a bit hysterical right now, since she thought she was going to be denied entrance to the Tir, so I thought maybe you could tell me what the fuck?”

“Oh fuck. You set this all up so that you could tell me a story? So that I’d ASK YOU TO TELL ME A STORY!”

“Hey, elves are natural storytellers. We have the lyrical blood of ancient musicians in our veins. We’re like, natural bards, Oscar.”

“Fuck. Fuckety fuck. I cannot believe I fell for this.”

“You owe me for this, Gwydion.”

“I was going to owe you either way, but this way is more interesting. Now shush, I’m storytelling.”


The guy was old, and I thought, Thai, or something. I’m terrible at Asians, which is ridiculous, since I’ve lived for decades in the Pacific Northwest. You can take a guy out of Texas…

He was old, and also didn’t speak too much English. Normally he’d have a nephew or something to translate for him while he sat back and looked mysterious, but I guess he was in a hurry, because he did the meeting all by his lonesome.

From what we could tell, it seems as if the local Triads had snatched this girl. The elf girl, for reasons that were obvious to anyone with a brain, and really disturbing to anyone with any imagination. Asian old man #2 was apparently a local fixer of some sort, because he’d managed to scrape together some nuyen from other people in the neighborhood, including, presumably, the parents, and threw up a post on a ‘runner forum, hoping for a miracle.

But like I said, he got a miracle, in the form of one Gwydion Peterson - knight-errant in shining… well, mostly black, armor. Now, I’m not usually one for good deeds, but the girl was an elf, and you can’t just have people targeting elves. That sets a bad fucking precedent. So I decided to take the job pro-bono, as it were. I mean, we still took the money, but I used it to pay the other guys. Probably I could have handled this on my own, but help often means the margin between something risky and something flat stupid.

The other two that answered the post were Johnny, who I’d worked with before, and was pretty much
crazy enough to want to pull a stunt like this, and a woman name Lymiol, who I hadn’t met. Lymiol you might want to look into. She had a Leelo-kinda vibe going on. She seems to have a ton of top-line ‘ware, she’s geared up and armed to the teeth, but man, she’s a bit cloudy in the old headspace. Anyway, she also agreed to forgo her share of the extremely modest pie, which was great, but also a bit weird, seeing as she had no dog in the fight, as far as I can tell.

The Triads were holding the girl in a restaurant that was a front for their other business. There was a front entrance and a basement garage entrance through an attached parkade. Basic surveillance turned up quite a bit of security, so we decided to splurge and hired a decker to ease the entry, as it were.

We got a fellow called Cable, who seemed a bit squirrely to actually take on a ‘run, but was confident that he could handle a remote attack on the security system. He had good references, and he came in under budget, so he got the gig.

I decided to go in through the garage, and to do it early in the morning. With Cable to deal with security, it seemed like the faster route, as we figured the girl was being held on the lower level. We figured Johnny would boost one of the Triad vehicles and disable the others while Leelo Bajillion and I did a hard entry and got the girl.

We had Cable cut the lights and open the garage doors, and Leelo and I went in fast and hard. Leelo had this submachine gun and just went in fucking blazing. Oh, and she showed up for the run in full combat armor. In downtown Seattle. On a weeknight. Like I said, a bit cloudy, but handy to hide behind.

So yeah, she started blazing away and hit absolutely nothing. But the Triad guys really focused on her. Luckily, they weren’t liking the dark or all the sudden gunfire, and they didn’t hit shit. I came in right behind her, and made my second mistake of the run. The first is that I should have led the entry with a concussion grenade, but I figured the sudden darkness would throw them more than it did.

The second mistake was that I headshot the closest Triad, but what I should have done is popped the one over by the door where the girl was being held, because that asshole promptly slammed the door. Like I said, mistake. But luckily Leelo was busily exchanging fire with the other two surviving Triad guys, so I took the opportunity to try and get that door open.

This is when I made the third mistake. I should have just shoulder-charged the door, but like a dumbass I tried the handle. Got it slammed in my face again for my trouble, and then the fucker locked it. I put a couple of rounds into the door, but Leelo got bored after taking out one of the Triads and winging the other, and decided to do a hair-on-fire full-auto charge through the door.

Which… worked. I had to step pretty fucking lively to avoid getting a bullet enema, but the door came right apart and she went through it like an NFL linebacker. She caught a bullet for her trouble, but nothing fatal, luckily. Those Triad guys were responding on full-auto by this point.

I killed him, too. I’ve never liked wasting ammo, personally. Then we got the girl and got out. Whole thing took maybe 30 seconds. By the time we were back, Johnny had a fancy Triad car ready to go and we hit the road.

The old man said that he was going to send the girl on to the Tir, so I gave her some travel money and my card, and told her to drop my name. You know the rest.

“Gwydion, you are a crazy asshole, but you did a good thing here.”

“I know, right? It was interesting, and I feel pretty OK about how it all turned out. Can you make sure she’s set up? I’d hate for all that ammo that Leelo used to be wasted.”
Posted by Jeremy Murphy at 1:19 PM