I use several random tables in our weekly D&D campaign. Often, the tables give me something interesting/funny to build on, but last night I had decidedly mixed results from the tables, so I thought it would be interesting to talk about that.

In general, random tables are great Improvisational Building Blocks. They provide a basic framework that you can build upon with other pieces from your toolkit, and as always, the complexity of what you build should be directly related to the level of interest that the players show for the event.

For the first example, I set up a series of regional daily encounters to go with my Moving Groups in the Wilderness rules. I roll each day, and there are a number of positive, negative or encounter events that can happen. One of the events on the table is "Eerie singing draws somebody into the woods. They are not seen again. -1 group member."

I actually rolled this result during the first trip the party made through the forest. One of the freed prisoners they were escorting was a skinny little local named Harlock, who we had already established had lost his family. When the party woke one morning, Harlock was gone, but the party Druid and Paladin were able to track him, and heard the faint singing.

If they hadn't cared and just moved on, I wouldn't have had to do anything. Just another mysterious event in a haunted forest. But they did care, and investigated, so it was time to expand the event.

One of the main Improvisational Building Blocks that you should have as a DM are Factions. I have several factions of Fey in my campaign, so I decided (since I didn't want this to be an automatic combat encounter) to use the Summer Court. They are self-interested and somewhat alien, but not hostile by default.

So the lost fellow had been lured through a portal to the Feywild. I got a chance to describe the Feywild, and expected that the paladin and druid would retreat. Interestingly, they didn't. The paladin entered the Feywild, bargained with the Dryads and checked to make sure the Harkon was ok and wanted to stay there. Harkon did, so the paladin left him to it. The fey were impressed at his chutzpah, though, and he got a sweet magical glaive out of the deal. 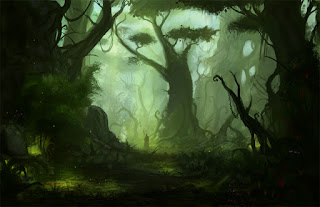 So now, with all that behind us, on the SECOND trip through the forest with a group of people, I rolled the exact same event! What are the odds of that? (About 1 in 4, really, since I rolled 3 times on 12-entry table). Of course, this time they had different people with them, including 3 prisoners that they were unsure what to do with.

In a fit of player-character inspiration, the paladin escorted the 3 prisoners through the forest to the portal and walked them through. They were entranced by the music, and the fey welcomed them as they had before. A potential problem was resolved (the prisoners) and a deeper connection with the Summer Court fey was formed. To the point where the paladin is now an Oath of the Ancients paladin... who worships the Raven Queen. This should be interesting.

The second instance of random tables results was not nearly so positive.