The Lost Library of Calacorius 1: How it Happened. Mages.  They're always messing around with things.  Stuff that you aren't supposed to mess with.

Like gravity, or dimensions.  Fuckssakes, people, things are put in different dimensions for a REASON.

This is, of course, the reason that Mages tend to have a fairly short life expectancy, at least compared to most things that can alter fundamental laws.  The ones that don't blow themselves up or get eaten by something from 6 dimensions over, though, they often accomplish some really amazing things.

The other factor to consider is that the sort of person who is willing to tinker with forces that might best be described as "indescribable" is probably somewhat... eccentric.  Also driven, and focussed...

Fine. Nuts.  Mages are usually nuts.  And the ones that aren't nuts to start are generally nuts by the time they come in contact with a few non-euclidian beings or non-pythagorean angles.  Human brains just don't process that shit well.

Along the way, though, these driven, focussed folks often create pretty amazing things.  And one such person was the Archmage Calacorius.

Like most obsessed people, Calacorius had a single diamond-hard thought.  He wanted a Library.  Not just a petty collection of scrolls and recopied books, not him.  He wanted a Capital L Library filled with all the books ever written in all of history.  Yes, I know that's impossible.  Nuts, remember?

Calacorius started his library by building an extra-dimensional space.  That allowed him to expand as
much as necessary.  Soon, the work of expansion bored him - he was more interested in acquiring books than building bookshelves, so he created a series of librarian enchantments and golem servitors and empowered them to file and expand the Library. 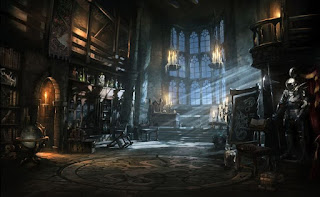 Like most hoarders, he didn't give a ton of thought to organization.  His magics allowed him to find nearly anything within the space, so he just gave them the keys (so to speak) and had them get on with it.

In the early days, he had a grand old time of it.  He scryed, travelled, acquired.  He deposited dozens, hundreds, thousands of books in his Library.  Sometimes he even read them.  Usually when he was studying ways to get more books.  Nuts, after all.

As time went on, he ran up against some limitations.  Time being a big one.  Also entropy, which is pretty much the same thing.  Also the fact that lots of books simply didn't exist anymore, or were too well protected from his scrying, or hadn't been written yet.  That one was a real stumper, but nothing a really, er, driven Archmage couldn't sort out.

Sure he couldn't get his hands on books that didn't exist, but in all those lovely dimensions, there was probably a similar book that DID exist.  Monkeys and typewriters.  All that.

So Calacorius started adding to the enchantments of the Library.  He set up the ability for it to create portals.  He built complex enchantments that identified and located really rare books.  Unique ones, lost ones, hidden ones.  The spells found all sorts of amazing stuff in adjacent dimensions, similar timelines and hidden sub-basements of reality.  Enthralled, he began to follow the portals to retrieve these treasures.

He didn't come back.  Which is a thing that happens when you dick around with dimensions.  Duh.

By that point, though, it wasn't that big a deal, at least not from the perspective of The Library.  The Library had things to do.  Vast aetherical engines powered it, magical constructs maintained it, it expanded itself, and it had a goal.  That diamond-hard idea was baked into every spell that made it.

So it did. It searched across the planes and dimensions.  Finding, retrieving, archiving.  It began to grow.  And it began to change, as things do, when left unattended.  Many of the books it contained were magical, and as anybody with half a brain knows, magical things don't tend to just sit around doing nothing.  Especially if you put them next to thousands of other magical things.  Stuff happened.

Coming Next:  Using the Library in your game.
Posted by Jeremy Murphy at 10:36 AM