We played a 2 1/2 hour session of Reclaiming Blingdenstone last night.  There was one combat encounter.  It was a tough one, and I'll go into why in a bit - but it was also right at the beginning of the session and relatively short.  Maybe 30 minutes all-in.  The rest of the session was pretty much all role-playing.  Which was AWESOME. 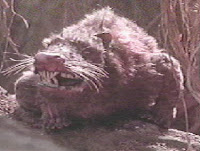 The session started with a random event "ROUS" - giant rats invading the storage palisade.  The party led the charge down the stairs and were immediately ambushed by 12 cave rats and 2 dire rats.  This was BY FAR the toughest fight I've done in Next.  If you don't have area-effect spells, minions can be a real handful, and rats can reinforce each other, gaining bonuses to hit.  Additionally, most characters don't have multiple attack options, so missing can really hurt.

Fortunately, some solid healing, a brave charge to the front/burning hands combo by the mage and some skilled use of expertise dice by the fighters (both of them used expertise dice only for damage reduction, and it may have been a TPK if they hadn't), and the day was won.  Hordes of light baddies can be a real issue - far more so than in 4E due to a more limited economy of actions and Vancian spellcasting - plus the party hadn't rested up after clearing the Town Center, so they were low on spells and slightly dinged up.

After the initial fight, that the players spent most of the session exploring various parts of Blingdenstone and talking to a lot of NPC's.  There was one turning point moment in the session where Briddick, an NPC the characters have had some amusing conversations with, casually mentions to them "I heard you gave the crown of Blingdenstone to Kargien.  Why'd you do that?"

The silence was immediate.  I could hear a pin drop.  I couldn't see their faces, but I know they were all thinking the same thing... "Why DID we give him the crown?"  followed by, "wait - not giving him the crown was an option?" and, "he gave us the quest, didn't he?"

One of the players responded with, "Well, he asked us to get it for him, and we just thought..."  and then he trailed off.  Briddick shrugged and said "Oh well, maybe it won't turn out that badly.  We can't get it back from him now, anyways."

And from that point on, the party was off like a hound on a scent.  They started asking Briddick and the other NPC's they met questions. They asked about Kargien, about what the gnomes thought of him, about the history of the expedition. They mapped relationships and identified who supported Kargien and who didn't.  They asked questions about lore and elemental planes and went and learned a lot about the gnome political situation.

They role-played.  It was great.  I thing we all had a ton of fun, and my cheat-sheet really helped - giving me quick prompts about what each NPC was like and what they wanted.

By the end of the session, the party talked to the Pechs, found out about the Boon and the Bane and got a little political intrigue started.  Since Kargien is hostile to the Pechs, and the party wants their help, and the Pechs want the gnomes to let them continue to live in Blingdenstone, the party had to find a way around Kargien.  Fortunately, they now knew that Gurmadden and Henkalla generally opposed Kargien, so they put the plan to coexist with the Pechs to Gurmadden, who got Pingtu, a general supporter of Kargien, but practical and influential gnome onside.  The plan should push through, allowing the party to enlist the active help of the Pechs in getting rid of Ogremoch's Bane.

The next order of business seems to be to scout out Entemoch's Boon and clear out the kobolds in the Wormwindings, so I better get that part of the upgrade done, as that chapter has some serious problems as-presented.

Posted by Jeremy Murphy at 7:44 AM