When I was about 8, I met +Perry Jones, who has remained a friend lo these many years (about 30 years).  We went to school in Edgewood, BC - which is about as small and isolated a place as you will find, short of the Yukon or Alaska.

Edgewood school was renovating at that time, and they dumped a huge pile of dirt and rocks along one side of the playing field.  Perry and I began adventuring on these 'mountains', and explored back and forth for a big part of that year. 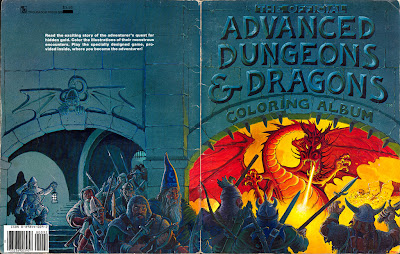 Later that year, I got the Dungeons and Dragons Coloring Book, which was the single most awesome thing
that any human has ever produced.

We became really interested in D&D, but I don't think we ever actually played a game.  Until...

The next year I moved over the ferry to Fauquier, BC, where I met the Klopps.  Specifically Mike and Tony Klopp, who actually PLAYED D&D.

I wasn't the DM, so I don't know what version of D&D we were playing.  I do know that the first adventure I went on was Blizzard Pass, so I assume it was Mentzer or Holmes Basic, since it was about 1984 at this point.  I might even have been the original Basic Edition, though, since Mike and Tony had 2 older brothers who had both played too.  I made 2 characters.  A dwarf named Chainmail and an elf named Whiplash. Whiplash fell down a pit and got eaten by a giant rat, but I'm pretty sure Chainmail survived.  I was hooked.
Perry and I played lots of D&D in later years, and kept up our friendship even as we moved around.  Sadly, I've lost track of Mike and Tony Klopp, but I still remember playing D&D in the back room of their house. 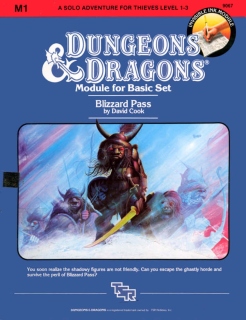 A few years later I moved to New Denver, BC, and Rayn and Nathan Butt lived across the street, and they were into D&D too.  I DMed, since I was the most interested, and we played with a rotating cast of others for many years.  I still see Rayn pretty regularly, although gaming night is board games now, instead of D&D.

Starting D&D wasn't something I was introduced to.  It was something I was waiting for my whole life, without ever knowing it.  So thanks Greg Irons, and +Perry Jones, and Mike and Tony Klopp, and Rayn and Nathan Butt, and +Nic Morgan and the gaming group from university.  I'm getting towards my 4th decade of gaming, and I still have a great time each and every session.
Posted by Jeremy Murphy at 1:09 PM